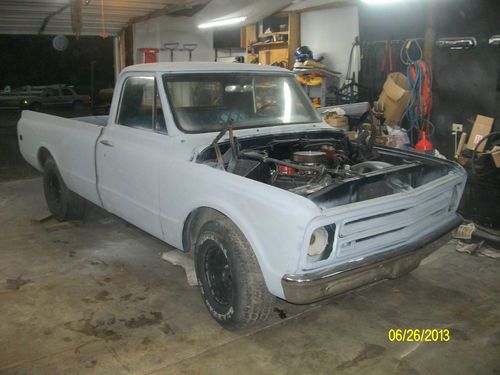 UP FOR AUCTION  1967 CHEVY C -10 PICK UP TRUCK,, THIS TRUCK IS 95 % READY FOR THE ROAD, IT NEEDS 2 THINGS DONE, THE DRIVE SHAFT NEEDS SHORTENED A FEW INCHES, AND IT NEEDS THE AUTOMATIC FLOOR SHIFTER PUT IN WHICH COMES WITH THE TRUCK.  THE MOTOR IS A 327 30 OVER,  U BARELY TURN THE KEY AND IT FIRES RIGHT UP,   THE TRANSMISSION IS A 350 TURBO AND IS IN GOOD WORKING CONDITION, I BOUGHT THIS TRUCK WITHOUT A MOTOR BECAUSE I HAD THE 327 IN MY BARN THAT I HAD BOUGHT OFF A FRIEND OF MINE,, SO LIKE I SAID ITS ALL PUT TOGETHER EXCEPT A FEW THING , I WAS GOIN TO PAINT THE TRUCK BEFORE I SOLD IT ,BUT I HAVE TO MANY PROJECTS  ,  AND NO TIME OR MONEY TO FINISH IT AT THIS TIME , SO THIS ONE HAS TO GO TO FUND OTHER PROJECTS,,      SO IM STARTING THE AUCTION AT 1665.00 WITH NO RESERVE THE MOTOR IS WELL WORTH MORE THAN THAT.   ANY QUESTIONS PLEASE CALL ME AT 260-4 FOUR 2- 9 EIGHT ZERO 5  I DO NOT ANSWER ANY EMAILS SO TEXT OR CALL ONLY PLEASE  ,,, OH AND I FORGOT TO ADD IT HAD NEW DUAL EXHAUST,  BRAKES AND TIRES R IN GOOD CONDITION//  BATTERY DOES NOT GO WITH TRUCK

NO RETURNS AND NO REFUNDS SOLD AS IS WHERE IS