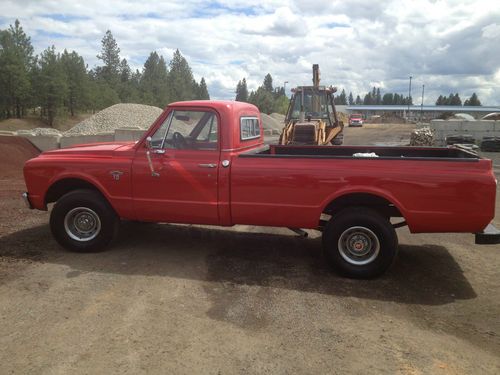 hi, i am selling this truck for a friend and this is what i got out of him ,has new dual exhaust, dash, wheels and tires, brakes, rotors, calipers,radiator, and hoses, battery and batt. box and cables .four barrel edelbrock is new, has new radio and antenna, mirrors, and bed rails, has new spray on bed liner with a rubber mat. the trans has been rebuilt and the engine has not but runs strong, no smoke and has 194 heads. basically he did a light restoration on it and never drives it. all the accesories work. lights heater etc. runs well shifts well. had some minor rust before paint and was taken care of with metal not just smack and smear bondo. any questions contact me through e-bay,  my name is chuck      thanks and good luck bidding