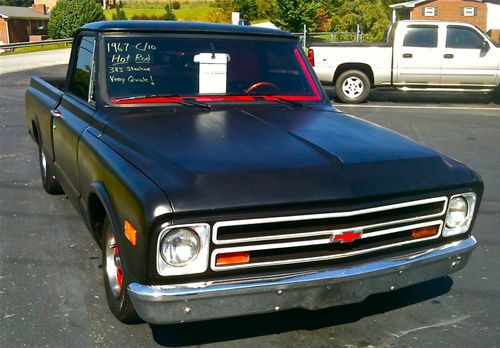 Condition: UsedA vehicle is considered used if it has been registered and issued a title. Used vehicles have had at least one previous owner. The condition of the exterior, interior and engine can vary depending on the vehicle's history. See the seller's listing for full details and description of any imperfections.Seller Notes:"383 stroker motor, 350 TH/Shift Kit, 3600 Stall, Flat black, lowered, rat rod look, Black and Red interior, Back vinyl bench, clean interior, Grant Wood steering wheel, nice truck. QUICK!Power steering, new brake booster. New tires, brakes, ready to roll!"

Shipping is responsibility of buyer,  20% deposit required after auction with in 24 hours of auction.  Payment in full within  72 hours from auction.
We reserve the right to end this auction early, as this truck is FOR SALE locally.