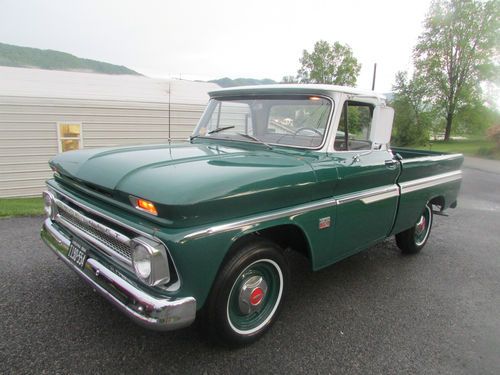 You are bidding on a "66 Chevy Truck. One family owned since new. currently it has 64992 miles which are actual mileage. I have sticker receipts for every year that it was tagged. i have the papers were it was tagged. I have the papers where it was purchased at Porter's Chevrolet Dealership in Castlewood. VA.
On 4-19-1974 he had a new engine block installed due to water in oil at that time the mileage was 19768 (have receipt). The truck has had one all over paint job.  look at the pictures of the inside of the bed it has never been painted. Two of boards are showing damage. Interior totally original even the seat. All gauges and lights are working properly. The tags currently on the truck are the original tags. This is one very nice truck. If any questions please call . 276-780-9617