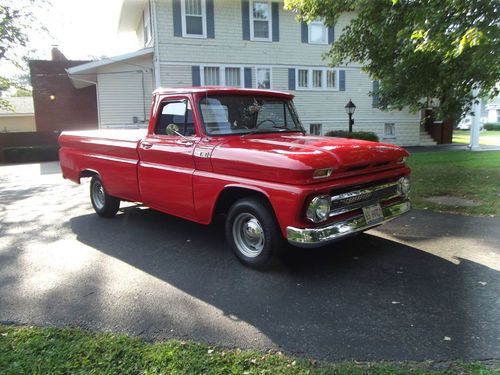 Condition: UsedA vehicle is considered used if it has been registered and issued a title. Used vehicles have had at least one previous owner. The condition of the exterior, interior and engine can vary depending on the vehicle's history. See the seller's listing for full details and description of any imperfections.Seller Notes:"Very nice condition. Older restoration, but very nice. Small imperfections, mostly due to driving."

Body
-Truck was painted in 2000, original color Cardinal red.
-few minor scratches and dirt nibs in paint.
-Front of left bedside has a small filler crack where it was wrecked long ago in that side.  Appeared in just the last year or so.
-Left front door has a few minor rust bubbles at back part of door.

Glass
-Most of the glass is original to the truck or swapped out for used parts.  Windshield does have a small scratch on the right side from a wiper arm.
-Side windows and back window tinted smoke with tint that repels heat.  This helps the a/c in this truck immensely.

Motor
-Has minor oil leak that appears to be rear main seal.
-No other leaks, replaced intake and valve cover gaskets two years ago.
-Engine was rebuilt and installed in 1999.

I will be upfront and honest with you about anything on this truck.  I built it and have owned it for almost 20 years.  I've enjoyed it very much and drove it to several events across the Midwest in the past 13 years.  Ready to move on to the next build.  Not interested in trades, please contact me if you do not have any feedback before you bid.  Truck is listed for sale locally and I reserve the right to close it at any time.  Please call Steve at 618-542-7148 for more info, or email me for more pics.  I'm sure someone will enjoy it as much as I have.  Good driver and still turns heads.  Thanks for looking.