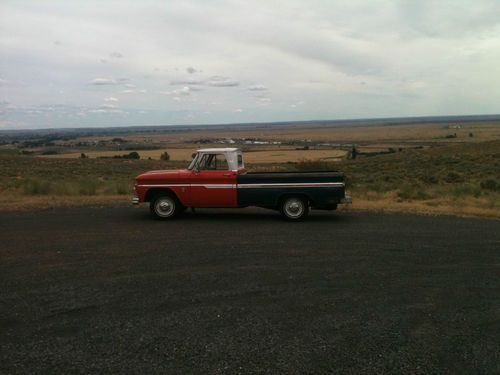 I've owned this truck for 5 years. The powers to be tell me it has to sell. Bought this from a young man who had inherited from his uncle. The pickup had been undercover for a lot of years, Had a built on camper which he removed and put on a fleetside box. It had 35,000 original miles at that time. The only thing I did was change the water pump, as it had a whiny sound, however it functioned fine. And the clutch was not real smooth, so I replaced the clutch disc and bearing. And the heater core with new hoses. Kept the motor oil changed religiously every 3000 miles with Valvoline 10-40. It has 51,000 original miles now and runs like a top. Does not have low compound gear and can travel 70 miles easily. It has a 235 engine with three on tree. Cab is solid and floor mats look like they came off the showroom. Driver's side seat has a few small cuts that have been taped. It's pretty much stock with some minor surface rust. Tires are about 85%, confident it would make it to Florida and back. It didn't have a radio, cigarette lighter and rear view mirror. I have purchased an original radio, new cigarette lighter and mirror from Ebay. Also, a new speaker and door latch is included. It has the original Owner's Manual. It just needs a good paint job and it would be ready to show. I hate to sell it but my medical bill needs paid.

ANY FURTHER QUESTIONS, PLEASE FEEL FREE TO EMAIL ME.