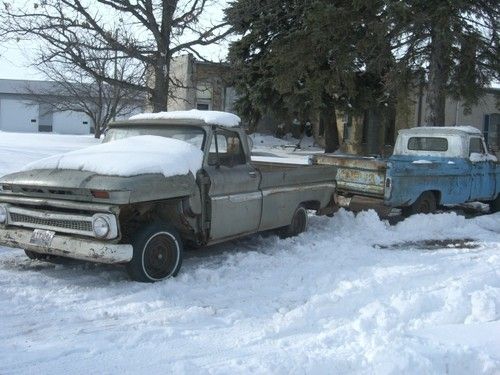 I am selling two '65 Chevy pickups that need restoration. Both came from a body shop in South Dakota where they have been sitting for 30 years.

The first one is a C-10 long box with a six cylinder manual shift. Motor is stuck, has numerous dings and scratches, missing front fender and wood box floor. The rest of the body is pretty rust free especially the cab. Has all the windows and the original radio. This truck does NOT have a title.

Second truck is a C-20 long box with no motor or transmission. Also missing is the front windshield glass. The rest of the truck is there but some rust as you can see in the pictures. This truck has a clear South Dakota Title.

Selling both trucks as a pair. Winning bidder responsible for picking up or shipping from 56257.

Trucks sold as-is, where-is, no guarantee's. What you see is what you get

No Reserve auction, highest bidder gets them both.