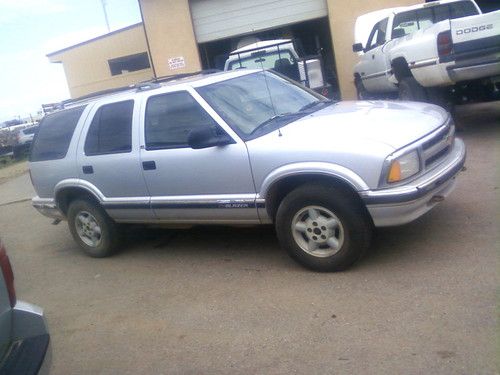 Condition: Certified pre-ownedTo qualify for certified pre-owned status, vehicles must meet strict age, mileage, and inspection requirements established by their manufacturers. Certified pre-owned cars are often sold with warranty, financing and roadside assistance options similar to their new counterparts. See the seller's listing for full details.Seller Notes:"Windshield is cracked but that can easily be replaced. Tiny scratches and small dent on one door hardly noticeable."
-I have a silver 1997 V6 4WD 4DOORChevy Blazer for sale. Good condition, paint intact, CD player, air conditioner and heater works, recently changed the tires, SPACEY, had a new engine put in with warranty,(meaning if anything goes wrong with the engine, it can be replaced) Brand new parts. PRETTY MUCH A BRAND NEW CAR ALL OVER AGAIN. I'm only selling because I am off to collage and you know how that goes... You can reach me here on facebook and i will message you the number. (Serious inquiries only.) Thank you.