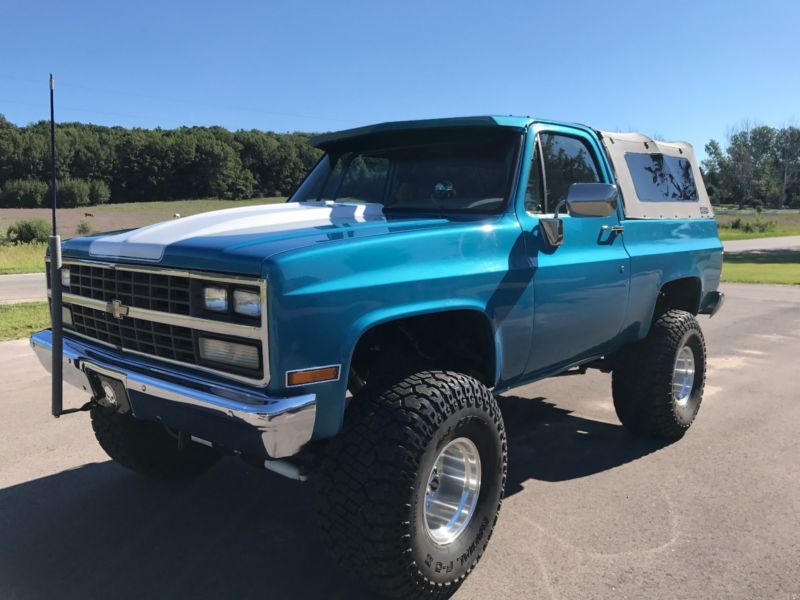 Custom 1991 top build 4 x 4 Chevrolet blazer. If you want the ultimate bad-boy blazer then, you likely have found
it. It started with a down-to-the-frame restoration using new quarter panels, a full interior custom painted roll cage,
a full lift and link suspension with steering stabilizer, carried by Mickey Thomson FC-II CEPEK tires mounted on
aluminum rims with Warn lockers. The interior sports new front and rear seats that support the passengers with
4-point harnesses. The RED-top battery is located in the back bed compartment and has a toggle ON-OFF switch
easily assessable from the rear bumper along with two charging terminals for easy reach. The electric windows just
add a nice touch. It sports a softopper grey fabric top with roll-up sides and back.
To help motor this beast it has a 600 hp, 383 Stroker motor with roller cams and 23 degree aluminum heads. It is
cooled with an aluminum radiator, two thermostatic high-capacity electric fans that can be manually selected-on at
any time with the flip of a switch. The motor purrs along at street speeds or roars to life with the light touch of
the accelerator.
To help transfer the horse power you can use the 3500 stall converter with the 400 turbo, built for 1000hp) manual
valve body transmission and B@M shifter. The transmission is also equipped with a temperature gauage and
selectable fan cooler. An easily visible sport-com TAC , fuel guage and a shift light help you along the way.
If you think it should be a bit faster just ignite the dual nitrous oxide with the press of a button on the center
console to bump it up to 800 hp. You will be excited every time you sit behind the wheel.
The entire build has been accomplished with top products and finished with professional care.