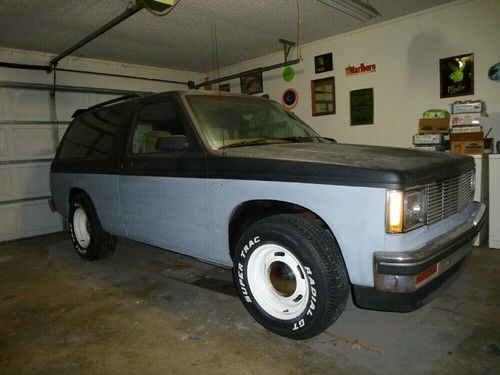 *** Please note - the HISTORY REPORT'S ONLY PROBLEM IS SOME MILEAGE ISSUE **** This is not an original truck and is a V8 conversion, it is a solid hot rod though.

I Will update this add with details and pics soon.   Vehicle needs mechanical work, so far I have straightened out the body and interior, and they are ready for final decisions and prep for painting.

V8 Conversion Done. Auto Trans.  Rally Wheels.  Original AC still installed but not working and I have not done anything towards figuring out why.  Assume the worst.

This truck does run, drive, start, and stop, but the mechanicals are weak and have not been sorted yet.  There is something electrical draining the battery.   The brakes are soft, but the front brake rotor are warped so I will fix that next if it isn't sold here.   The shocks also definitely need replaced and will be done in the same order.

I am offering this truck for this week for anyone who wants to build a solid S10 Blazer into a hotrod.  Otherwise I will.

I will add pics and a link to a lot more pics shortly.  Thanks for looking.