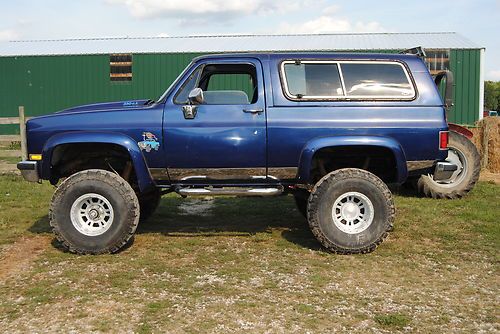 Condition: UsedA vehicle is considered used if it has been registered and issued a title. Used vehicles have had at least one previous owner. The condition of the exterior, interior and engine can vary depending on the vehicle's history. See the seller's listing for full details and description of any imperfections.Seller Notes:"There is some cracking in driveres side rear quarter panel. Some rust appearing under drivers door handle."

You are bidding on a 1984 Chevy Blazer 2dr. with  a lift kit. It has a 350 engine and 350 transmission, with 4X4.  There was new patch panel on drivers side rear installed 28 June 2001 along with the paint job. There is some cracking and bubbling in the drivers side rear quarter panel (see photos). There is also a rust spot under the drivers side door handle (see photos).  Rest of the body looks good. Very little putty spots in it.  4X4 works great. Runs and drives. There is a problem with the starter, so it might need to be replaced. Just when it is hot you have to let it cool down and then it will start right up. Starts with the first or second turn.

There is no warranty on this vechicle. Sold as is where is.

If you have any question please ask before bidding. Buyer is responsible for shipping and shipping costs.