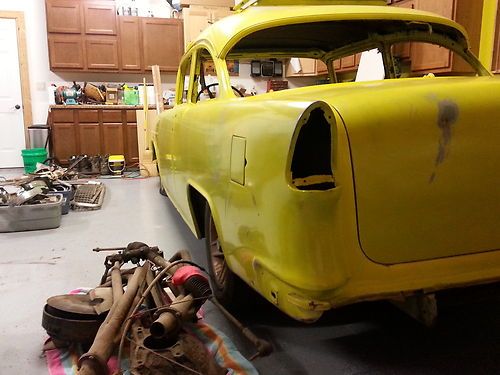 Condition: UsedA vehicle is considered used if it has been registered and issued a title. Used vehicles have had at least one previous owner. The condition of the exterior, interior and engine can vary depending on the vehicle's history. See the seller's listing for full details and description of any imperfections.Seller Notes:"NO MOTOR OR TRANS, NO INTERIOR, VERY SOLID BODY AND FRAME"

I have a very solid start to great ride, this is a project 1955 Bel Air 2 door post. The dash has not been cut the door trunk and hood are all in great shape and very straight. I have new door handles and signal lights from Danchuck. Two speedos one auto and manual lots of chrome. two driver quality grills. front end has drop spindles with disk breaks and the rear is lowered with springs.(i have a trick 4 link weld in kit if reserve is met) The doors trunk and hood are solid no rust and straight, front fenders are great no rust. From what I know its a one piece frame that solid with no rust all body mounts are solid. the car has been jamed in bright yellow including the engine bay and trunk, he sprayed the car in light coat to protect while in storage. Great start to very nice car, I have changed my direction so I need to sell. The car rolls and steers so loading is easy.

Please only bid is you are serious and what this car, my reserve is set, you can ask. Car is in NW  MN. Car is listed local so I reserve the right to end this auction at any time.