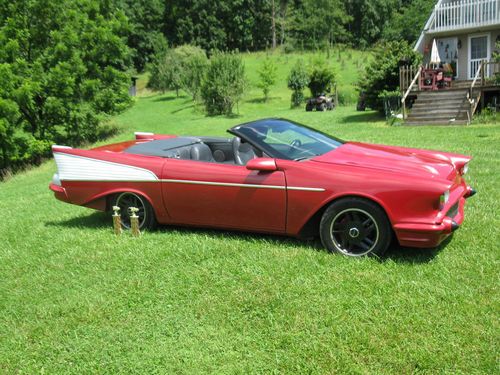 Condition: UsedA vehicle is considered used if it has been registered and issued a title. Used vehicles have had at least one previous owner. The condition of the exterior, interior and engine can vary depending on the vehicle's history. See the seller's listing for full details and description of any imperfections.Seller Notes:"The Radio needs an antena, there are a few nicks in the paint, Abs need to be cleaned, Ac needs to be cahrged"

This is a 1995 Camaro Z28 with only 77K miles on the drive train, that has had an Easyrods 1957 Belair body kit put on it, So It has all of the modern Camaro comforts but with the looks of a !957 Chevy Belair. We Have taken the car to 3 shows since we got it finished and it has won 3 trophies including 1 for Most Modified, 1 for top 5, and one for top 20 and was runner up on best in show. Custom exhaust with Glass Packs so it has a real classic hot rod sound going down  the road. It has a set of brand new Copper directional tires . WITH NO RESERVE, and NO TRADES