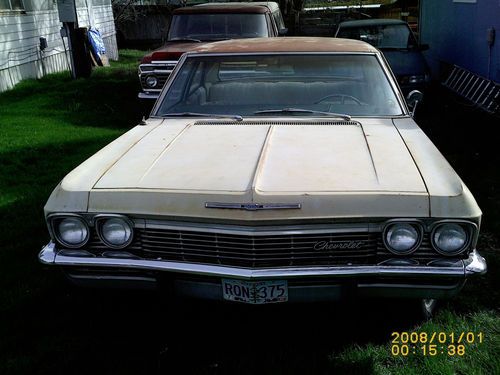 here is a 1965 chevrolet belair with just over 51,000 original miles on it. it runs and drives, however when I picked the car up, the points were bad and it backfired and blew the muffler up. I bought this car
about 10 years ago with plans to restore it, but I just don't have time and to many other projects. the body is pretty straight other than the two scrapes on the right rear quarter panel and the right rear door  as shown in the pictures.
the trunk floor is pretty rusty where the original trunk mat was, also the paint has worn thin and allowed surface rust to form. the front seat cloth has deteriorated from the sun, however the springs and pad are in good shape and can either be re upolstered  or just put a seat cover over it. the transmission  on this vehicle failed early in the cars life and was rebuilt. reverse and the forward gears work great, but park does not lock very good. the engine does appear to be original including the water pump evidenced by the factory paint and the original plug wires. I did put on a new fuel pump when I bought it. this car is in fairly good condition for it's age, and would be a fairly easy restore. I uploaded a short 4 minute video on youtube  that includes a quick drive through town plus a walk around at( youtube dot com/watch?v=vAVMiX9n9jI )( copy and paste this link then replace dot with a period because ebay won't allow links to other sites)

I have described this car as best I can with what i know about the vehicle. if you have questions, please ask before bidding. I would rather the car didn't sell than to have a dissatisfied customer. I will try to answer all questions by the end of the day.  if you are having a shipping company pick up the car, I can drive it 9 miles to biggs junction which is right off interstate 84 or 30 miles to our warehouse in the dalles oregon which is also right off the interstate to save pick charges. if you purchase the vehicle,  and can't pick it up in a timely manner, I will store it for up to a month, however I am flexable and will work with you as long as we communicate.  if you have questions please use the ebay ask a question feature, or you can call me at 541 980 0636.