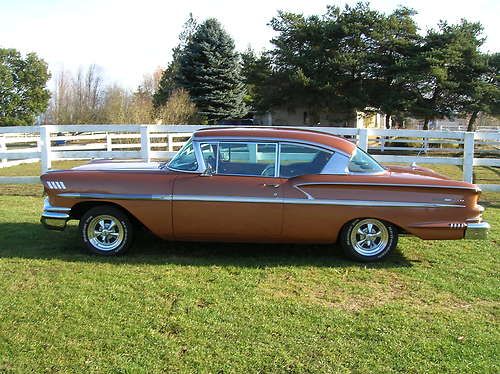 This is a nice Chevrolet Bel Air 2-door hardtop.  It is powered by a Chevy 350 cu. in. V-8 with an Edelbrock four barrel carburetor and intake manifold.  The transmission is a stock 3 speed manual with column shift; the clutch is good and tight.

The interior is custom brown naugahyde with tan herringbone cloth inserts and the original upholstery trim.  It rides on BF Goodrich TA radials and Cragar wheels.  It is a GREAT driver!  I've drive it from Sequim, Washington on the Olympic Peninsula all the way to Sacramento, California without a bit of trouble, and it was a smooth ride.

I bought this car about eight years ago on eBay - sight unseen.  It was a littler rougher than it looked in the pictures.  Since then, I've done and had a lot of work done over the years to make it as nice as it is now.  Here is a list:

I've seen two other '58 Chevy Sport Coupes for sale in the last year or so that look just like my car including paint color, tires, and rims; they're both frame-off restorations and the owners were seeking $50,000+/-.  I also saw one recently that is a project car and the owner has a "buy it now" price of $13,850.  My car is very well "buy it now" priced at $16,500.  It is not a high-dollar show car for the following reasons:

So, you are bidding on a reasonably priced, good looking, and reliable 1958 Chevy Sport Coupe.  I've had a lot of fun with it, but I have a couple of other toy cars and I'm too busy as a self-employed person to drive all three of them.

If you have questions, I can be reached at (360) 504-2440.  If you have the time and interest, come see the car in Sequim, Washington. Once the auction has ended, the down payment of $1,000 is due through PayPal within 48 hours.  The balance must be received in verified funds, cash or wire transfer, within 7 days and prior to my releasing the vehicle.   The successful bidder can fly into Seattle, Washington and drive this car home!  Shipping is an alternative; I am not offering shipping on this vehicle.  However, I will work with the winning bidder's shipper.  My zip code is 98382 if you want to obtain shipping quotes.

Thank you for looking and Happy Bidding!