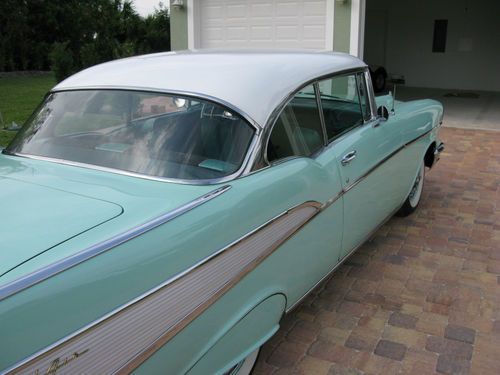 i have a very nice 454 big block with 700r auto transmission that can go with it for an extra 3500 that i was going to install but i was diagnosed with brain cancer and have two many cars and not enough free time so we are thinning out the heard.i looked for years before i found the right 57 chevy the pictures speak for them selves the car runs and drives like new and is all original its a two owner from new car and its in a very rare color combination of surf green and a two tone interior of black and green see the pictures car runs and drives like new
green and black one of the nicest most original cars i have ever seen
car is seriously for sale so call if you want to buy it now
Mark Lees 772-519-0646 9am-9pm eastern florida time