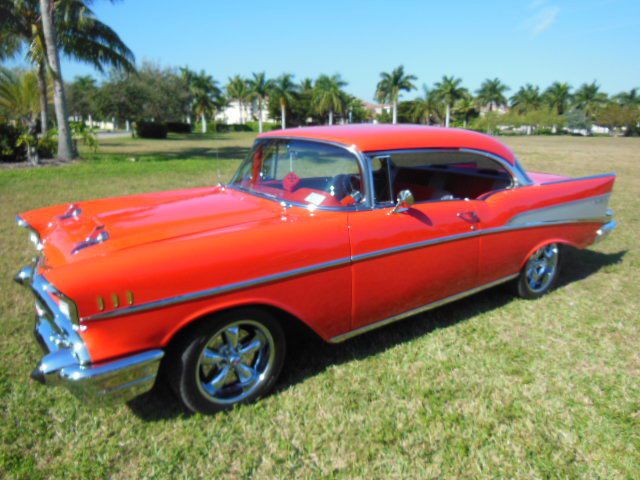 1957 CHEVROLET BEL AIR RESTO MOD, 2 DOOR HARDTOP, INVESTMENT GRADE, ABSOLUTELY GORGEOUS CAR HAS WON MANY "OVERALL
BEST OF SHOW" TROPHIES. THIS CAR IS FROM TEXAS WITHOUT RUST AND WITH IT'S ORIGINAL SHEET METAL BODY PANELS. CAR HAS
HAD A FRAME UP RESTORATION AND "BEAUTIFULLY" FINISHED IN ORIGINAL COLOR OF MATADOR RED WITH DUPONT BASE/CLEAR.
NEW 383 STROKER ENGINE WITH ONLY 1800 MILES
700R4 AUTOMATIC TRANSMISSION
POSI TRACTION
POWER DISC BRAKES
POWER STEERING
AIR CONDITIONING
NEW INTERIOR
CHROME "COYS" WHEELS
TRUNK COMPARTMENT FINISHED IN "SHOW" CONDITION
ENGINE COMPARTMENT FINISHED IN POLISHED ALUMINUM AND CHROME
HIGH TORQUE STARTER
FLOWMASTER EXAUST HAS A GREAT SOUND
ALL CHROME LIKE NEW
MUCH MORE
ALWAYS GARAGED, DRIVEN ONLY TO CAR SHOWS.
THERE ARE NO ISSUES WITH THIS CAR/IT NEEDS NOTHING
READY FOR THE SHOW CIRCUIT
THIS IS A MUST HAVE FOR ANY CLASSIC CAR BUFF