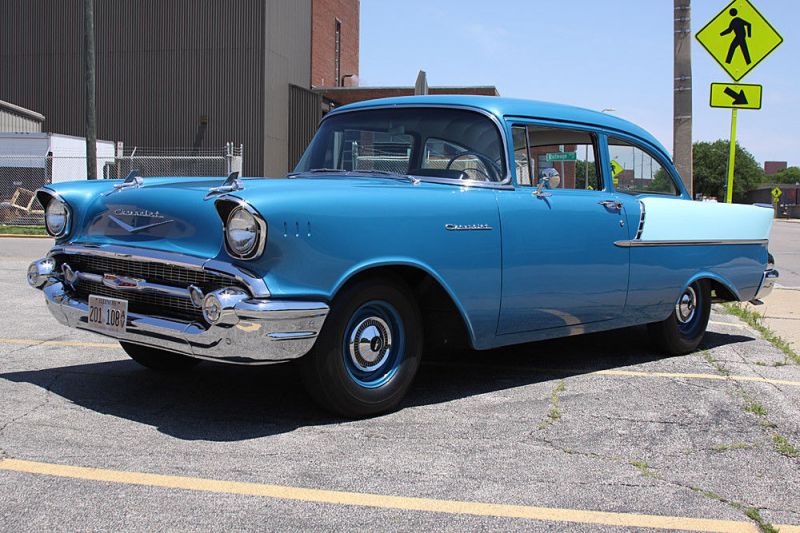 If you have any questions please email at: jocelynjaalamo@celticfans.com .

I have a bunch of paperwork and receipts for all the work done on this car.
It was purchased in Sylacauga AL from the original owner around 1991 by a guy named John Holleman from Montgomery
AL.
John told me the car had only 30,000 miles on it and was a rust free car. He sold it to Wayne Smith of Vintage
Autos in Montgomery. Wayne did the engine swap from a 6 cylinder along with paint and interior in 1992-1993. The
car has been driven approximately 1150 miles since then. It has a 1957 283 with the correct 997 270hp heads, solid
lifter cam, dual quad intake and carter carbs along with an original bat wing oil bath air cleaner. The underside
is painted red oxide. Harbor Blue is the original color. The Harbor Blue paint is still holding up well for an
almost 25 year old single stage lacquer job. We did have to repaint the Larkspur blue with basecoat and clear as
it was dried out at cracking. There are some minor paint chips and a place on the passenger side rocker arm where
the paint flaked off and you can see the red primer. The car still has the original 3 on the tree manual
transmission and stock open rear end. It should have a rubber mat rather than carpet.
This is an unmolested car with all original body panels, floors and trunk. There is no sign of any body work or
repair done to any of the sheet metal.
Since I took these images, the car has been driven about 200 miles. I have also added new control arm bushings and
front shocks.
The car does need a few things like window felts. It still has the originals. It really needs a good detailing to
the engine and undercarriage. There is some chrome peeling from under the front bumper on the lower passenger
side.
There is a local airport in Springfield IL if you want to fly in to inspect. I would be happy to provide a ride
from the airport or you could uber or taxi in.