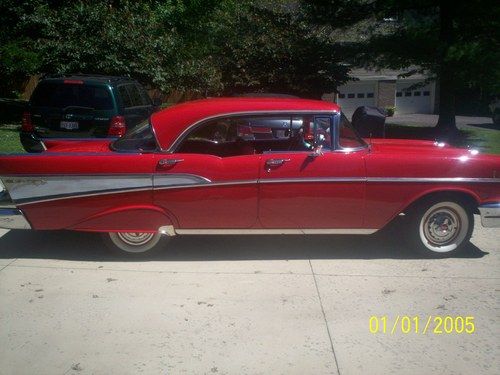 Condition: UsedA vehicle is considered used if it has been registered and issued a title. Used vehicles have had at least one previous owner. The condition of the exterior, interior and engine can vary depending on the vehicle's history. See the seller's listing for full details and description of any imperfections.Seller Notes:"car is in beautiful condition has been completely frame off restored by previous owner have previous owner receipts as well as my own you will not be dissapointed"
1957 Chevy 4 door hardtop, 283 engn., 3 speed turbo auto trans.,
restored to original condition, older off frame rebuild, red in color,
Lot's of chrome, new paint, new interior, complete past history to
buyer. always garage kept, never driven in bad weather. This is a beautiful 57 chevy. this car is as clean on the bottom side as it is on top. the car does not have power steering or air conditioning.    Would
consider trade of equal value for a 57 T-Bird or late model 47-49
Ford or Mercury convertible.   you can bid with confidence on this car its ready to drive home.       Also have some additional photos I can email thanks and happy bidding