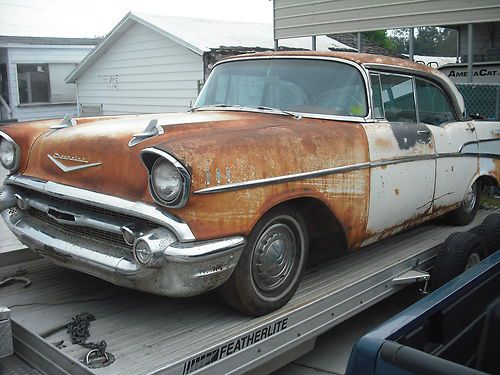 1957 CHEVY BEL AIR IN 100% ORIGINAL UNRESTORED CONDITION. THE CAR IS UNMOLESTED WITH 283 POWER PACK,POWER STEERING, TREDLE VAC POWER BRAKES, AUTOMATIC POWERGLIDE TRANSMISSION, TINTED GLASS, RADIO, POWER ANTENNA, CARPET, DELUXE INTERIOR AND I'M SURE I'VE MISSED A FEW ITEMS. THIS CAR IS ORIGINAL ALL THE WAY DOWN TO THE PAINT. I BOUGHT THIS CAR TO MAKE INTO A NICE DAILY DRIVER BUT AN UNEXPECTED FINANCIAL OPPORTUNITY HAS COME UP AND I NEED TO RAISE SOME QUICK CASH. I'LL BE SELLING A FEW OTHER CARS FROM MY SMALL COLLECTION AS WELL.

THE STORY I WAS TOLD WAS THAT A REAL ESTATE TRANSACTION TOOK PLACE AND THIS CAR WAS DISCOVERED IN NORTH FLORIDA IN A BUILDING ON THE PROPERTY. THE CAR HAS NOT BEEN DRIVEN SINCE 1972 AND THE 75000 MILES SHOWING IS LIKELY CORRECT BUT I CAN'T SWEAR TO IT. THE LICENSE PLATE ON THE CAR IS ALSO 1972 WHICH AGREES WITH THE FLORIDA INSPECTION STICKER FROM THAT SAME YEAR. THIS CAR NEEDS COMPLETE RESTORATION. THE FLOOR PANS ARE WEAK AND THE FRAME IS SOLID. I'VE TAKEN GOOD PICTURES IN ORDER TO HELP DETERMINE WHAT IT WILL TAKE TO BRING THIS OLD GIRL BACK. THE WORST RUST IS IN THE TRUNK LEFT SIDE WHERE THE BUILDING LEAKED AND WATER LAID IN THE COMPARTMENT. THE TRUNK LID IS SHOT AND NEEDS REPLACING. THE TRUNK HAS WHAT LOOKS LIKE THE ORIGINAL SPARE WITH THE ORIGINAL JACK, BASE, AND WING NUT HOLDING IT IN PLACE. I HAVEN'T TRIED TO SPIN THE ENGINE OVER BUT I WILL FILL THE CYLINDERS WITH MARVEL MYSTERY OIL AND GIVE IT A TRY IN A FEW DAYS. I DIDN'T GET A TITLE,JUST A BILL OF SALE. A STORAGE TITLE IS $250-$350. I DON'T RECOMMEND BUYING FROM PICTURES SO COME ON DOWN TO SUNNY FLORIDA AND CHECK THIS BEAUTY OUT OR SEND SOMEONE YOU TRUST TO DO IT FOR YOU. CALL ME AT 772-201-1905 WITH QUESTIONS IN CASE I'VE LEFT SOMETHING OUT THAT IS IMPORTANT. TIRE KICKERS AND LOW BALLERS ARE ALWAYS WELCOME AND ALL OFFERS AND TRADES WILL BE CHEERFULLY CONSIDERED NO MATTER HOW RIDICULOUS. THANKS FOR LOOKING, GOOD LUCK BIDDING AND GOD BLESS.    772-201-1905 TILL 11PM EASTERN TIME. STEVE