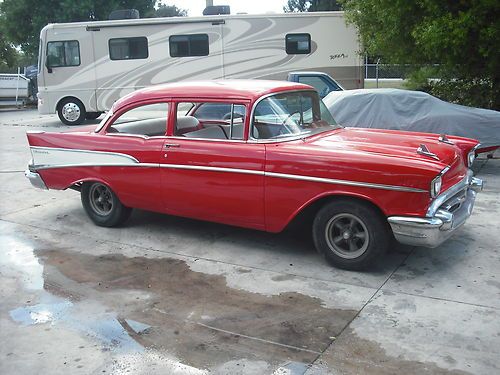 YOU WILL NOT FIND A MORE SOLID CAR THAN THIS ONE. THIS CAR HAS BEEN A DAILY DRIVER FOR YEARS. I BOUGHT IT FROM A FRIEND THAT NEEDED MONEY AND SENT IT STRAIGHT TO THE PAINT SHOP. THIS CAR WAS PINK AND IT WAS HIDEOUS. EVEN THE INSIDE WAS PINK. I HAD THE ENTIRE INTERIOR DISASSEMBLED AND REPAINTED. THE FLOORS AND TRUNK ARE INCREDIBLE AND THIS IS TRULY ONE NICE DAILY DRIVER. I MUST CAUTION THAT THE PAINT IS A NICE DRIVER QUALITY JOB AND MOST DEFINITELY NOT A SHOW JOB. IF YOU WANT A SHOW JOB THIS IS NOT THE CAR FOR YOU. I WILL DESCRIBE THE CAR TO THE BEST OF MY ABILITY AND IF YOU HAVE QUESTIONS PLEASE CALL ME AT 772-201-1905 OR EMAIL ME. IF I HAVE LEFT ANYTHING OUT IT WAS NOT INTENTIONAL. I DON'T RECOMMEND BUYING FROM PICTURES SO COME ON DOWN TO SUNNY FLORIDA AND CHECK THIS OLD GIRL OUT. IT WAS 70 DEGREES AT 6AM AND A HIGH OF 85 SO COME ON DOWN AND ENJOY. THIS CAR IS DEPENDABLE ENOUGH TO DRIVE HOME SO BOOK THAT FLIGHT.

HERE ARE THE DETAILS: RUST FREE BODY......350 V8 ENGINE WITH EXCELLENT OIL PRESSURE,RUNS PERFECT AND QUIET AS A MOUSE......TURBO 350 TRANSMISSION WITH A MILD SHIFT KIT THAT CATCHES SECOND GEAR RUBBER EVERY TIME IF YOU STEP ON IT.......NO LEAKS, NO SMOKE, EXCELLENT MECHANICS.......ICE COLD AIR CONDITIONING......POWER DISC BRAKES THAT STOP ON A DIME WITH CHANGE.....ALL GAUGES WORK INCLUDING THE GAS GAUGE AND THE SPEEDOMETER......EVEN THE EMERGENCY BRAKE WORKS......SOME OF THE CHROME ON THE CAR IS WEAK, THE HOOD SPEARS ARE PITTED AND THE BUMPERS ARE NOT THE BEST. THE STAINLESS IS REAL GOOD......THE INTERIOR IS ALL NEW INCLUDING THE SEATS AND DOOR PANELS. THE HEADLINER IS OLDER BUT IN REAL GOOD SHAPE......CARPET IS GOOD AND HAS BEEN IN THE CAR FOR A FEW YEARS SHOWING SOME WEAR......ENGINE RUNS NICE AND COOL EVEN WITH THE AIR CONDITIONING RUNNING AT IDLE......NICE OLD STYLE RETRO MAGS.......ELECTRONIC IGNITION......ALUMINUM INTAKE......CHROME VALVE COVERS........THERE IS PROBABLY MORE BUT I CAN'T THINK OF ANYTHING ELSE. THE CAR IS AN EXCELLENT DRIVER. BE SURE TO ASK QUESTIONS. I'M UP LATE AT 772-201-1905 TILL 10PM EASTERN TIME.

TIRE KICKERS AND LOW BALLERS ARE ALWAYS WELCOME AND ALL OFFERS AND TRADES WILL BE CHEERFULLY CONSIDERED NO MATTER HOW RIDICULOUS. I MAY ADVERTISE THE CAR LOCALLY SO I MUST RESERVE THE RIGHT TO END THE AUCTION EARLY IF SOMEONE COMES ALONG WITH A WAD OF CASH. PLEASE ONLY BID IF YOU HAVE THE MONEY TO PAY FOR THE CAR AND INTEND TO GO THROUGH WITH THE TRANSACTION.  THANKS FOR LOOKING AND GOD BLESS.