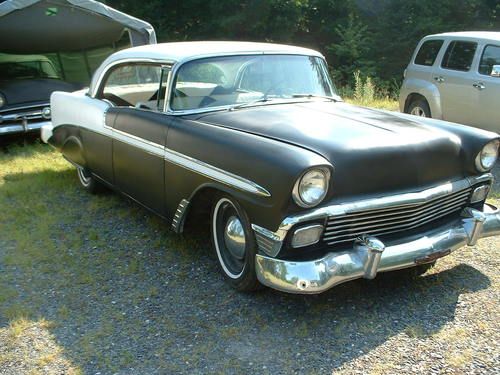 LOOK CLOSE!!! THIS 4 DOOR HARDTOP WAS CUSTOMIZED IN THE 60'S . NOSED, DECKED, SHAVED HANDLES, CONTINENTAL KIT, SKIRTS, ETC. IT IS AN ORIGINAL A/C CAR (COMPONANTS ARE WITH THE CAR). POWER PACK V8, POWERGLIDE, P/S, P/B, PADDED DASH. IF YOU ARE LOOKING FOR A PERFECT TRAILER QUEEN, THIS IS NOT IT!!!  THIS IS A SOLID, GOOD DRIVER, THAT HAS SURVIVED 57 YEARS. THE INTERIOR IS VERY PRESENTABLE, THE UNDERNEATH HAS MINOR RUST AT THE INNER ROCKERS, THE BODY HAS HAD RUST REPAIRED, IT IS FINISHED IN SATIN BLACK AND WHITE. THIS IS A FUN CRUISER THAT TURNS AS MANY HEADS AS A $75,000. SHOW CAR. IF YOU WANT TO OWN A FUN CAR WITH OUT SPENDING YOUR LIFE SAVINGS, THIS IS IT. I HAVE AN OPEN FLORIDA TITLE, WHICH WILL GO WITH THE CAR, AS WELL AS A BILL OF SALE. THIS IS BEING SOLD WITH NO RESERVE, FIRST BID MAY OWN IT. CHECK WITH YOUR WIFE, HUSBAND, MOM, DAD, OR ANYONE ELSE THAT MAKES YOUR DECISIONS FOR YOU BEFORE BIDDING. I RESERVE THE RIGHT TO CANCEL ANY BID THAT I'M NOT COMFORTABLE WITH. E MAIL ANY QUESTIONS, I'LL ANSWER THEM.  BUY IT AND DRIVE IT AWAY OR HAUL IT, TRANSPORTATION IS BUYERS RESPONSIBILITY.