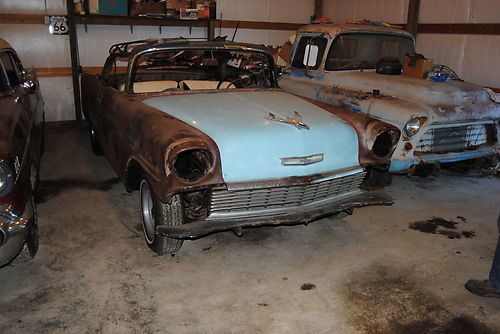 You are bidding on a 1956 Chevy Bel Air Convertable. Just to many projects. It has the original transmission & 3 Speed on the column. The motor is a 350 out of a pick up truck with abt. 80,000 miles on it. Motor and tranny runs good and strong with no slippage. And does not smoke. New Front and rear floor pans and braces. New Rocker & Inner Rocker panels. New Quarter panels. All four wheel cylinders redone recently, has really good brakes. I have most of the outside chrome and and rear bumper. Has top cylinders & motor- may possibly need rebuilt. It has old school slotted mag rims & two brand new white lettered BF Goodrich tires on the back. It needs a windshield and back seat.

Body is straight. ready to be finnished out.

The original color from cowl tag is Black. Hard to get a picture of cowl tag.

If you have any questions call 812.986.2836 or email. If no answer leave message, we will get back to you as soon as possible, live on farm.

Deposit of $ 500.00 due 48 hrs. upon close of auction. The remained due within 7 days of close of sale, Cash in person, Bank check, Money order, car released after clearance of checks. You are responsible for shipping and all cost incurred. Will help shipper load.