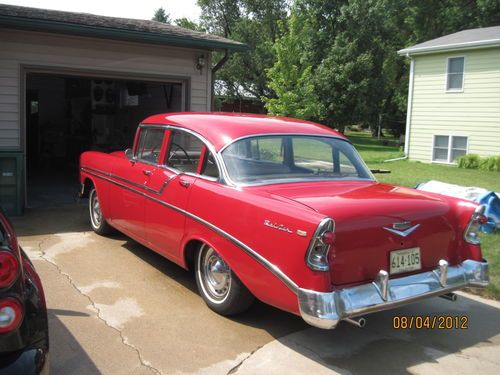 Up For Sale is a 1956 Chevrolet Belair , 4 Door car. This car is a rolling project. The car has current license and is drivable. I drive this car to local cruisins and other car functions that come up in our part of the state. About the car ; The car has been repainted by previous owner and in real good condition, shines great . New weather stripping has been installed on doors and rear decklid also. Nice quiet ride.  Bumpers are in divable condition but could be rechromed if desired. Headlights and tail lights have pitting on them, side trim real nice.Body exterior is solid but when it was repainted, new rockers were put on but inners were left alone . If completely restoring this vehicle I would of replaced inners also . I havn't had the carpet up but floors seem solid except for a small area on drivers side rear . A couple of the floor braces need  a little work. The interior is still original ,  usable as is or to show , would need a new interior. The engine  is a rebuilt 283 ci with a 2 speed auto trans. which runs and drives real nice. The car has new exhaust, new brakes and new radial tires.This car runs and drives nice , nice smooth ride. This really is a decent shape 57 year old car.  I had the car appraised at a local restoration shop  for insurance purposes. Appraisal was right at $12000.  This car just needs someone to give her a little more TLC. Drive it like it is or finish restore for show. This car is for sale locally so if it sells here, I reserve the right to end auction early. Car is located in Algona Iowa. Local pick up only. I can assist loading car on your trailor or transport. Car  is being sold as is  where is.   I am trying to  be as informative as I can  about this car.  As I said earlier, the car runs and drives solid the way it is  or, with a liitle TLC, make it for show. Turns  heads just the way it is now.  515-341-1523