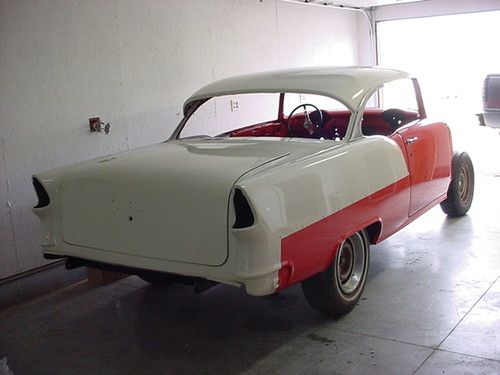 Condition: Used: A vehicle is considered used if it has been registered and issued a title. Used vehicles have had at least one previous owner. The condition of the exterior, interior and engine can vary depending on the vehicle's history. See the seller's listing for full details and description of any imperfections. ...
THIS CAR CAME FROM TEXAS.IT HAS NEW QTRS,ROCKERS,FRONT FLOOR PANS.DOORS AND FENDERS WERE IN EXCELLENT COND.EVERYTHING WAS DISMANTLED AND SAND BLASTED.FRAME WAS PERFECT.NEW FRONT DISC BRAKES,MASTER CYLINDER,LINES ETC.BODYWORK DONE AND PAINTED.JUST NEEDS TO BE ASSEMBLED.WILL NEED ALL CHROME AND GLASS,AND INTERIOR.MOTOR IS A 350 325HP FROM SPEEDWAY MOTORS WITH A 36 MONTH WARRENTY.REBUILT TURBO 400 WITH NEW 2500 STALL CONVERTER. REAR IS A RARE FACTORY POSI WITH 307 GEARS,SEALS,BEARINGS ETC..I HAVE SOME NEW WEATHERSTRIPING,INNER AND OUTER DR HANDLES,T LIGHT ASSYS,PARK LAMPS,NUT AND BOLT KITS FOR BODY ,FRONT CLIP ETC.THIS CAR IS A PROJECT AND WILL NEED TO BE FINISHED BUT HAS THE EXPENSIVE WORK DONE.THIS SHOULD BE A 30- 35K CAR WHEN DONE,PLEASE CALL WITH ANY ?S. CHUCK 320-760-1077