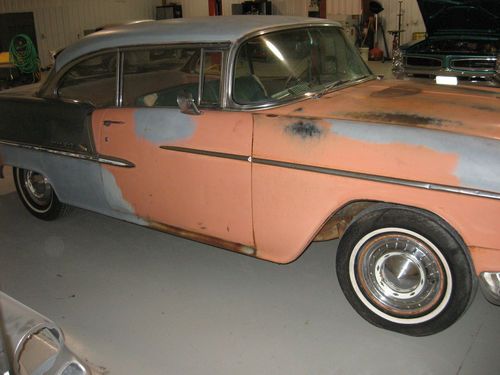 Barn find, suvivor, or whatever you call it, I found this car several years ago and have too many projects and not enough time !  Been sitting for several years after the owner passed away. I pulled the gas tank and installed a new one, cleaned the plugs, put in a battery.and it fired right up. It runs,drives,stops and shifts fine.. Now for condition. The body is very straight, looks very solid,stainless trim and flippers are very good, I also have the missing quarter trim. The trunk floor is solid and the inside floor looks good. uncut rad. support and very solid frame. The engine is a little later 283.  The W/S is cracked and most side glass is foggy around the edge. most of the body supports have some rust and will need replaced if you do a frame off. This would be a excellent car to restore, or paint,interior etc. and make a nice driver. You don`t find a lot of these nice origionals left. Email or cal 308-532-1382 with any questions. a $500 non refundable deposit due in 48 Hrs. and the car to be picked up and paid for within 2 weeks unless prior arrangements are made. If you have no feedback rating,call before bidding. Thanks