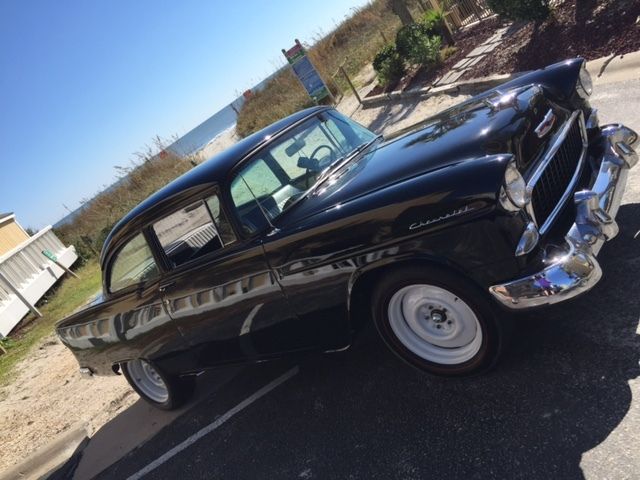 If you have any questions please email at: albertomaradiaga@netzero.net .

1955 CHEVY 150 2 DR POST CAR THAT IS LAZOR STRAIGHT AND ALL ORIGINAL SHEETMETAL, THIS IS THE CAR EVERY ONE
LOVES FROM THE MOVIE AMERICAN GRAFITTI, TWO LANE BLACK TOP, AND STEVEN KING MOVIE SOMETIMES THEY COME BACK , THIS
IS A BLACL LAZOR STRAIGHT CAR THAT YOU CAN SHOW OR DRIVE. I DROVE IT TO BEACH YESTERDAY IS WHERE I TOOK THE PHOTOS
THE CAR RUNS AND DRIVES GREAT. IT HAS A 383 CHEVY STROKER ENGINE WITH MSD FUEL INJECTION, MUNCIE M22 ROCKCHRUSHER
TRANS, AND A MOZER 9 INCH FORD REAREND 350 GEARS. IT HAS 4 WHEEL POWER DISC BRAKES AND 17 INCH VINTEC WHEELS ON
HER. YOU CAN GET IN THIS CAR AND DRIVE IT ANYWHERE ALL LIGHTS AND GAUGES WORK LIKE THEY SHOULD.