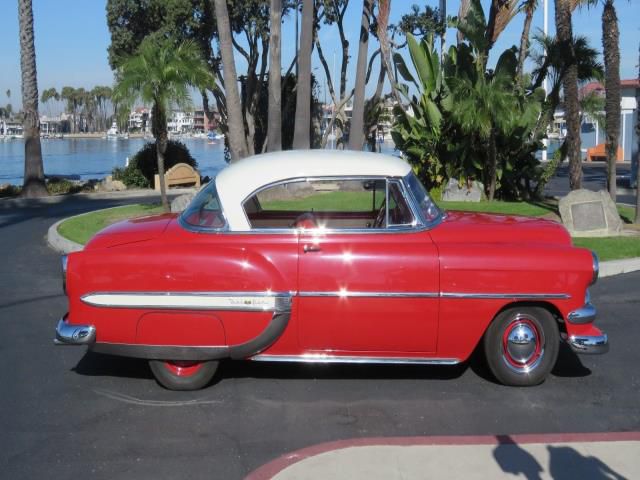 Please contact me only at : st4qcrudolphgustav@mail-on.us Up for sale is my California Classic 1954 Chevy 2 Door No Post Bel Air. This was my dads car unfortunately he passed away before he got to enjoy it . I hate to let this beautiful 54 chevy go but I just don't have the room to store it anymore. The color is red with white top and the paint is as smooth as glass with a nice mirror reflection finish there is not one dent scratch or rust anywhere on this chevy . In fact it was still in the paint shop when he passed.All the chrome and stainless steel is in perfect condition there no dents ordings anywhere and nothing is missing. The drive train is a chevy 350 backed up with a turbo 350 transmission . The electrical has been converted from a 6 voltsystem to a 12 volt system it even has the wind up clock that still works. The front suspension is a mustang rack opinion system with disc brakes on all four wheels. The interior is red and white and is in perfect condition check out the pictures . The windows roll up and down perfect and there is no broken or cracked glass. The front and rear window rubber is new along with all the door and trunk rubber. This car drives like a dream and the steering is nice and tight it has power steering and tilt wheel.