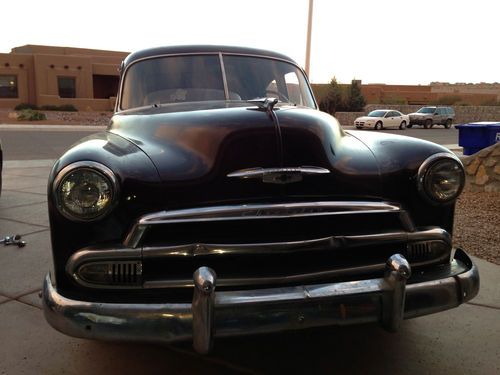 This is a 51 sedan with a clean texas title. The car came out of Texas and is a solid car. It runs and drives but it does need work. The carb is rebuilt and has new fuel lines all the way back. It has a brand new 20 gal fuel cell in the trunk. The headlights and tail lights all work. It is a 3 speed manual transmission. The interior is in pretty good shape. All the window roll up and down fine and the front and rear glass is in good shape. The drivers window has some cracks but it is very cheap to replace since its flat glass. I have all the molding,chrome, door handles with original keys, bumper guards, rear fender chrome rock guards, bumper riders, The chrome and handles were removed because the car was going to be stripped down and painted. Again I have all the original chrome trim handles and keys. These cars are getting harder to find and this one is a very solid car. It is not a rust bucket. It need to be painted and some minor body work. As you see in the picture the paint is peeling off on the passenger side and the raw metal is what you see. The motor fire right up but it need to be tuned and some minor timing adjustment. It has the rear skirts included and good coker white walls on it. If you have further questions or require more photos feel free to call,text, or email me. My number is 575-649-2221.
Buyer is responsible for pick up or shipping of vehicle.
-- sold as is ----
happy bidding!!