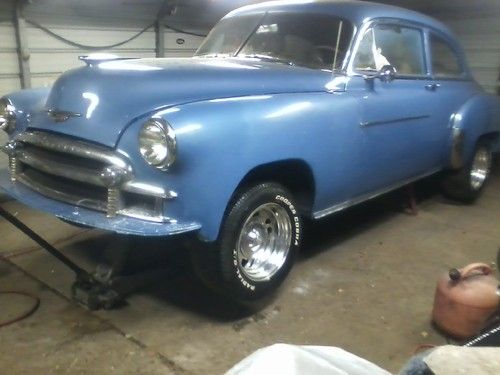 1950 Chevy Styleline Deluxe 2 door,  235 engine with a manual trans.  It has a 1 wire 12 volt alternator, with gauges, New aluminium radiator, new wheel cylinders, master cylinder,new fuel pump and water pump.  The lights all work. The floors have been repaired and POR 15, insulated, and new carpet added.  Power seats from a late model Grand Prix have been installed. The brakes have been repaired and operate well..  All stainless is on or in the car, the headliner needs to be installed as well as door panels.  The bumpers need re-chroming.  Painted Sherman-Williams base coat/clear coat 4 years ago. It has some checking starting.  This is not a perfect street rod but it won't take much to finish it.  This car is a Texas car.

Put on the exhaust, new door glass, and new tires then drive anywhere.

I am selling it to build a shop!!!  No hidden issues with the car.