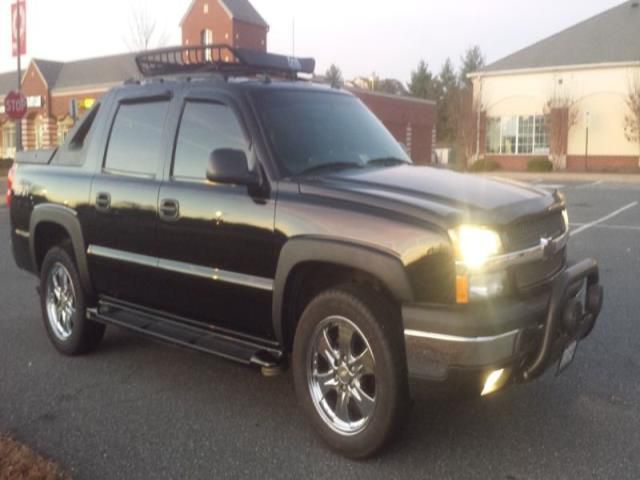 2004 Chevy Avalanche Z71 1500 4x4. It has just about every option except Navigation. I'm the second owner of this vehicle. Below are some of the features: Only 75k miles. Mostly highway for family vacation travel. Seats 5+ adults comfortably. Rear a/c, heat and radio jacks. Dual climate control. Full powered and heated leather seats. Satellite radio/OnStar Roof rack. Roof rack attachment not included in auction but may include in the sale depending on the selling price. Bull Bar. Off road lights are on the bar but are not hooked up. Lighted running boards. Puddle lights on the automatic folding mirrors. Excellent condition inside and out. Paint is 9.5/10 (maybe a small scratch here and there but that's it. Small ding on rear bumper) Interior is 9.0/10 (minimal wear on driver's seat. All other seats are flawless) Satellite Radio paid up through 5/15 I believe and I also just added Iphone/ipod integration. Z71 Off road package. Powerful V8 Vortec Engine. 20" OEM wheels with Good Year tires. 2Tires have only been on for about a year. Needs: nothing mechanically. I have receipts for work performed during my ownership. It does only come with 1 key and remote (needs a battery). It has two car alarms set, but the new owner will need to decide on which one to reactivate. Also is due for an oil change. I was going to get it done, but I'll leave that for the new owner in case they have an oil preference. I've always used synthetic. I'd also get the tires rotated. I do that along with the oil changes. You won't find another as clean. I love this truck but I'm downsizing my stable. A lot of truck for the money! Recent maintenance: New front shocks (last week) I also added a brand new battery, recently installed front brake pads and both front wheel bearings. Truck needs nothing so bid with confidence.