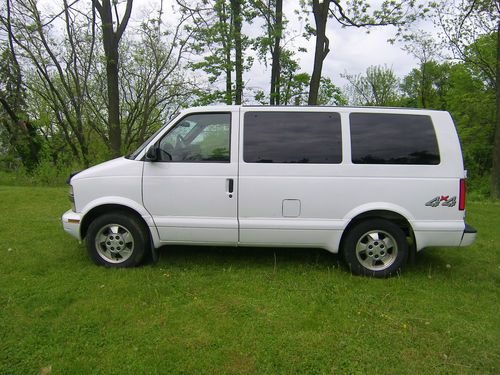 2003 CHEVROLET ASTRO 8 PASSENGER VAN AWD.. THIS VEHICLE COMES EQUIPPED WITH THE AWESOME 4.3 V6 ENGINE , AUTOMATIC TRANSMISSION.. THE VEHICLE HAS A LOW 94,000 MILES !!! THE EXTERIOR IS IN EXCELLENT CONDITION !!! GLASS AS WELL IS FLAWLESS. INTERIOR IS GOOD.... TIRES HAVE 75,000 TREAD MOUNTED ON THE BEAUTIFUL ALUMINUM ALLOYS. THIS VEHICLE WAS WELL TOOKEN CARE OF AND RUNS AND DRIVES GREAT !!! PLEASE FEEL FREE TO ASK ANY QUESTIONS YOU MAY HAVE. THIS VEHICLE IS UP FOR SALE LOCALY AS WELL AND IS BEING SOLD AS IS!!