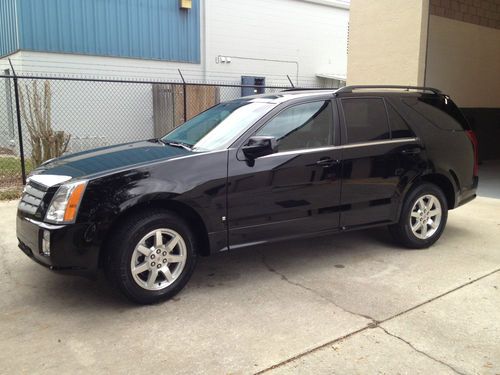 This is a 2008 Cadillac SRX in GREAT CONDITION.  EVERYTHING in the car WORKS, from the
basic mechanical (engine, brakes, drivetrain, etc) to the accessories (huge sunroof, back up sensors, and ALL other
electrical components).
The Interior is also in LIKE NEW condition, especially the rear seats as they might have been sat in a handful of times!

The two-wheel-drive models includes dual-zone air conditioning, front side-impact airbags, remote start, front and rear side-curtain airbags, leather seats, Ultrasonic Rear Park Assist, power rear liftgate, Bose audio, StabiliTrak stability control, leather-covered tilt wheel with touch controls, four-wheel anti-lock disc brakes (ABS) and cast aluminum wheels.
If you like the feel of a sports wagon but would prefer to sit up a bit higher, the Cadillac SRX will fit you like a glove.  In a addition to its agile handling and powerful engine, the SRX returns a smooth, controlled ride and can accommodate lots of cargo. All 2008 SRX models receive an adaptive remote start system which can start the vehicle, set the temperature, engage the defroster and even turn on the optional heated seats from as far away as 200 feet
FEATURES:
-Huge Sunroof
The optional UltraView sunroof is composed of a huge glass panel that covers a five-foot section of the roof,
effectively exposing the first and second rows to the sun.
**Please Contact Joseph- (954)-817-7178 or Tony-407-921-8600 for any questions