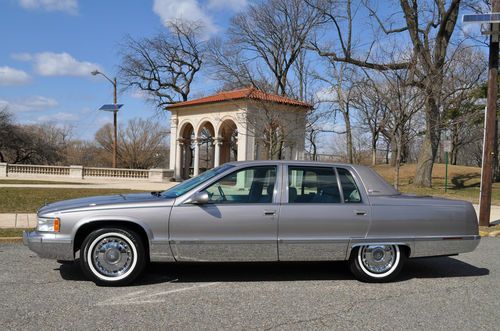 Condition: Used: A vehicle is considered used if it has been registered and issued a title. Used vehicles have had at least one previous owner. The condition of the exterior, interior and engine can vary depending on the vehicle's history. See the seller's listing for full details and description of any imperfections. ...
Hello folks and thanks for taking a minute to look over my absolutely pristine 1995 Cadillac Fleetwood Brougham in Fawn Gray Metallic with only 31,500 miles although I must admit that this Fleetwood looks as if one of those zeros should be left off the mileage..it's just that stunning! Please see for yourself...copy and paste the links to over 200 pictures and video at the end of the ad!

If you are looking at this vehicle, I shouldn't have to ramble on about all the details for I'm sure you're already aware. The condition and pedigree is what's important to the collector/enthusiast like you so here we go. The car was a one owner vehicle up until last year when a gentleman purchased it from the estate of the late original owner and transferred it over to me. In order to do so legally, the gentleman had to register it in his name before the title could be sent to me so technically I'm the 3rd owner but for all intents and purposes the second.

Since I purchased the car I spent quite a bit of time and money making it into the jewel you see before you. I completely went over the car and decided to purchase 5(spare tire as well) original chrome Cadillac "lace" wheels and 5 brand new white walled Bridgestone tires. The trip to Brogan Cadillac last month included the necessary wheel alignment, coolant flush, power steering fluid flush, brake fluid flush, throttle body cleaning and replacement of the (IAC) idle speed control sensor which all totaled $1,300.

I replaced both rear window plastic channel guides, which commonly crack over time, with new ones so that all windows function properly. At the same time, I purchased 6 additional plastic guides to have on hand when needed for the front windows (included). I forgot to picture that I also have a "NOS" (new old stock) third keyless entry remote as well as a NOS set of uncut Cadillac gold keys (ignition-vats#2 and door) as spares just to have on hand...they aren't making this stuff anymore folks.

I have clean and clear NJ title in-hand and ALL the original content of the white "gift box" with black ribbon that Cadillac gave it's customers which included the VHS tape, grill emblem, owner's manual, etc., as well as the original window sticker. (pictured)

Please carefully look over the 200+ pictures and video(sorry for the wind noise) of this Fleetwood to really get a sense of what it is although I must say that the images you see, as nice as they are, don't do the car justice in terms of color, glisten and presence.

For all you true collectors and enthusiasts out there...this Fleetwood Brougham is truly a once in a lifetime find.

Happy Bidding and bid with complete confidence!
Come out and see it for your self, no surprises!
Export, OK!