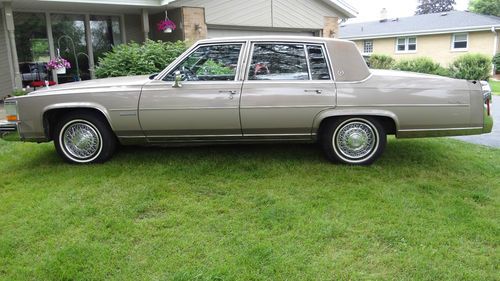 UP FOR BID IS A LIGHTLY USED 1983 CADILLAC FLEET WOOD BROUGHAM, I'M THE SECOND OWNER OF THIS CAR.  IT HAS UNDER 50,000 DOCUMENTED MILES AND IS ALL ORIGINAL.

MOTOR IS EXCELLENT,TRANS SHIFTS AS IT SHOULD.

CAR HAS BEEN VERY WELL MAINTAIND THROUGH OUT ITS LIFE, COOLING SYSTEM HAS BEEN SERVICED AS A CADDY SHOULD BE.

VINYL TOP HAS SOME LIGHT FADE AND CRACK BUT  STILL LOOKS OK FROM FIVE FEET AWAY.