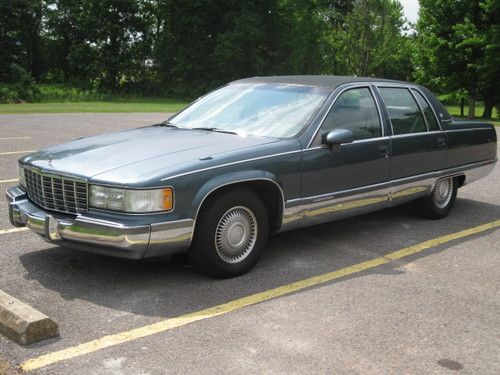 KBB value is $2,608 with 160,000 miles. 1993 Fleetwood rear wheel drive 5.7 350 engine. 23 mpg highway, very clean inside and out, runs and drives great, cold ac, about 80% tread on the tires, paint shines nice except for the hood. No lights on, no leaks and has no mechanical issues, I would drive it from Tennessee to California today. Ive owned about 10 of these big body style 93-96 fleetwoods from stock to fully custom, this one is a good car. Its so smooth you don't know its running. Steering is tight, brakes are smooth, engine is quiet & strong and the transmission shifts like it should. The ac is cold but there is a switch in the glove box to make the fan blow on high (pictured). The rear windows don't work and the power antenna stays up, it clicks all the time when its hooked up so I took the wire off. The vinyl top, and dash board has some heat/sun cracks like they all do. Driver seat is worn (pictured) Small wrinkle/ding (pictured) in right rear door (so small the camera wouldn't pick it up very well) I bought this car here on Ebay in 2006 the fuel gauge didn't work and it was a defect in the cluster so I replaced the complete speedometer cluster (that fixed the problem) with one that had 38,000 miles. It had 155,000 miles in 2005 and 38,000 in 2006, now it shows 46,000 so it actually has around 165,000. My intensions was to make it a drivable show car with custom paint, interior, wire wheels and hydraulics but I decided not to because it was in too good of condition to cut up so I sold it to a friend, its has sat with the sun beating down on the paint all these years and only driven a few times a month to keep the seals and fluids moving. When I sold it to him in 2006 it looked like a showroom brand new car. Ive put about 500 miles on it in the past 2 weeks to make sure its mechanically sound and ready to make someone a dependable car. I have a new DTS Cadillac but ive been driving this one everyday. Clean clear Tennessee title that don't show odometer issues.