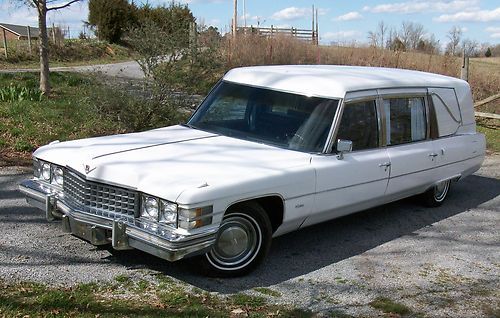 Condition: UsedA vehicle is considered used if it has been registered and issued a title. Used vehicles have had at least one previous owner. The condition of the exterior, interior and engine can vary depending on the vehicle's history. See the seller's listing for full details and description of any imperfections.Seller Notes:"SEE COMPLETE LISTING"

Car has a 472 with 28,860 actual miles. New belts, Alternator, and Battery. The only mechanical issues are a small oil leak and a crack in the smog control pump bracket (see pictures) Some paperwork in the dash from the original owner including yearly inspections noting mileage through 1987. It was purchased in 1974 by a funeral home in King, NC and they used it until 1987 and sold it to a small firm in West Virginia, they traded it in on a newer one in 2004 and it came into the possession of an individual in the Chattanooga area. It has been out of Service since 2004. The individual and the dealer he bought from say that these are the actual miles. It drives strait and true just as a Cadillac should, although it might benefit from a good tune-up as it idles a little rough at time but has plenty of power. The brakes work well and the transmission shifts fine. The man I got the car from said that on the way back from the dealer in Virginia the transmission began leaking and he in turn had it rebuilt when he got it home (2004). It also has an external transmission cooler now.  Runs and Drives Good. Looks pretty good for a 40 year old car, it is not perfect. Has been repainted a few times and could stand to be painted again to make it really nice. It has a few chips and blemishes in the paint and a few little areas of surface rust and some bubbles in the lower front fenders that will need some attention,(please see pictures). The frame and floorboards are solid. I tried to get pictures of the under side, they are not real good but maybe you can get an idea.
Interior is in good condition and could stand a good cleaning. (see pictures)New tires receipt is in the dash.All functional parts still in back. Jump seats and belts are there. Comes with Landau Panels, Ambulance Plates for rear windows, cot (old Washington two man), and fire extinguisher. It has a small modern siren on it and still has all the controls for the lights, rear air/heat, rear dome lights, etc.. The Radio works but the antenna has quit in the down position and the air conditioner compressor has been wired to a toggle switch mounted under the dash and does blow cool air but will also need some TLC. All the Glass is good.Asking $5495.00 O.B.O.Call or text 423- 599-0328 with any questions. If you call and get no answer leave a message and I will call you back.
A $500.00  "NON-REFUNDABLE" Deposit is required with in 24 Hours of the end of the auction. This car is sold as is where is with no warranties implied or expressed. Buyer is responsible for shipping however I will be glad to assist in any way that I can to make it easier. Please look at the pictures and description and ask any questions you may have. If you require additional pictures of certain areas please feel free to ask. Thanks for looking.