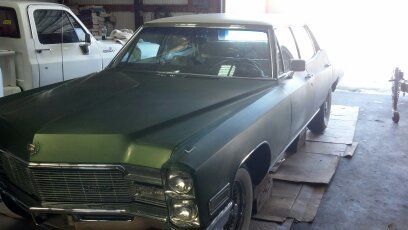 Stored for years until I discovered her.

I had to replace allot of dry rotted pieces "like everything". 4 core radiator, interior completely removed and carpet refurbished. metal on floor needed nothing but cleaning, no rust anywhere, seats gone over with horseman's leather cleaner and preservative. Some electrical issues. Wood grain metrically removed and replaced with 1/4 grain African mahogany wood on wood.

I mounted a pioneer cd player in the glove box. kept the original glove box. made a perfect sleeve for the stereo.

All chrome bumpers are perfect.

There was a few dents that were worked out of the body, haven't repainted yet.