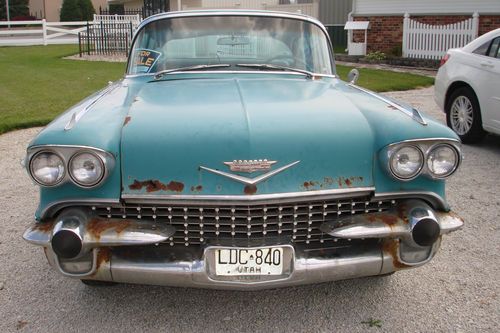 This is a 1958 Cadillac Fleetwood 60 Special...  It's a rolling project car...  Original motor is just sitting in the engine compartment; It is seized and not operational...  We were in the process of putting a 500 cubic inch Cadillac motor and turbo 400 transmission when this project got put on the back burner...  It needs front floor boards, trunk is solid, cracked windshield, minor rust in hood and rockers, bumpers have rust but are solid (no holes), the front cross member has been cut in the process on installing the 500 engine to clearance the oil filter, needs to be boxed in yet, will need brake work, dash pad has some small cracks.  As for the upsides for the car, This car is in really great shape for the age, aside from what's mentioned above...  99% of all the trim is in tact and on the car, Other than the minor rusted mentioned above all of the body panels are in really good shape.  The frame is solid... All of the dash and instrument panel is in tact and complete.  All of the tail light lenses are in great shape!   Other than the crack in the windshield, all of the glass is in great shape.  The interior would be considered as above fair condition... The series 60 special has power windows, power locks, power trunk release,  We have new brackets to convert the fronts to disk brakes. ( This car does NOT HAVE A TITLE, but will give a bill of sale at time of purchase...)  This is a really unique and cool car with a lot of potential to be a nice ride...  Too many other projects at this time so if you're looking for a solid project car and you like the Cadillac fins, this might be the one for you!!!  The 500 cubic engine and 400 transmission is not included with the purchase of the car but can be purchased separately...  It is a low mile, running, resealed motor and good transmission that has been bolted into the car and taken out several times,  Call with any questions...  Car is for sale locally so ad can be removed at any time...  Mike 260-228-0125.  We are located in Warren, Indiana, right off of Interstate 69.  $500.00 deposit paid by paypal due within 24 hours after end of auction.  The balance due in cash or money order at time of pick up...  The car will need to be picked up by buyer within 14 days after end of sell...  This car is for sell with NO RESERVE!!!  No solicitors or spamming please!