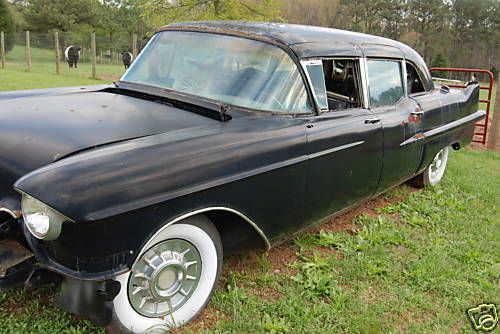 I have THREE 1957 Cadillac Fleetwood limousines for sale.

All three are restorable but my plan was to restore The Black Imperial Limousine and use the other two as donor cars.

Black one is very solid (from Georgia) & was painted 10 years ago and the chrome was off and being dipped when some AH stole the chrome.                   Then it was tarped and stored outdoors which is the kiss of death for a new paint job. The owner was disheartened, lost interest and sold it to me                and I bought 2 more from Colorado to use as donors. It ran when stored a few years back. I have since bought a 4th one that is turn key so am selling this project.

These are somewhat rare as there was only a small number of factory produced limos and even fewer of the Imperial Limos (divider window).
They are easily worth 20k + each when finished. Restore them all, sell two, make $$ and keep one for free!

1957 Fleetwood Limousines are highly sought after and there are very left out there....!!

I have added one picture of how they can look when finished, VERY SHARP!!

These Limos are being sold with AS IS as a classic, antique restoration project with bill of sale only. NO TITLES

There is no warranty or guarantee of any kind existing on these limos either expressed or implied.

THIS IS a BUY NOW AUCTION and payment is expected immediately........