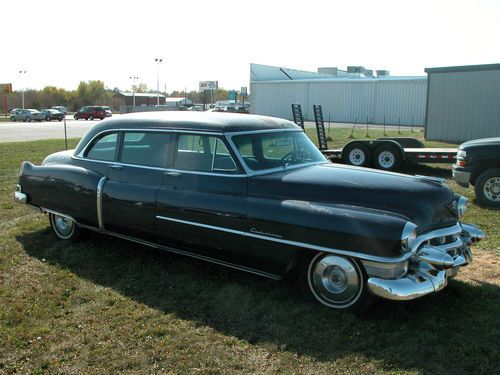 I have a very solid 1953 Cadillac Fleetwood 75 Limousine for sale.  The 331 V-8 runs well and sounds good.  The previous owner rebuilt the engine about 5 years ago.  I don't have the specifics on the rebuild.  The trans does slip severly in forward gear.  Reverse works fine.  The power steering and brakes are good.  The miles are 63,396.  This one came from dry Montana and has a really solid body and undercarriage.  The bumpers were rechromed some years ago but still shine well.  Both front door glasses  have cracks but don't leak.  The rest of the glass is good.  The paint is the correct code 9 which is Cobalt Blue.  A rare color for a Limo.  The clear coat is peeling in many places.  The interior is also the original colors of 2-tone blue cloth.  Much of the interior has been redone in the correct patterns.  The headliner is very good.  The seats are nice.  The carpet is worn.  The door panels were also redone.  The front door panels have a speaker hole in them to accept modern speakers.  The previous owner installed a modern sound system with hardware in the trunk.  There is a remote for the system included.  I have only played the new-style radio and it works fine.  The power windows are not currently working.  It has a decent set of correct '53 Cad hubcaps on it.  This one does have the original jump seats in the rear.

This 1953 Cadillac Limo needs a few things but is a good one to restore!  I had a local "old-time" mechanic estimate $700-800 to redo the forward band/rebuild the trans.  Then paint it and you're driving down the road in true style.  The interior is already pretty nice as-is.  A dark blue 1953 Cadillac Fleetwood Limousine would be a very impressive car to drive and ride in!!