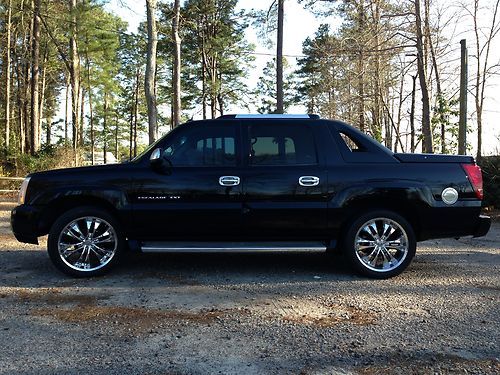 This Escalade is in good condition inside and out, and there are no known mechanical problems.  It is a non-smoking vehicle.  It has DVD player's in each headrest and one screen in the passenger visor as well.  It has 22 inch Chrome Cadillac wheels that make the car look great on the Black exterior and tan leather interior.  It has a tow package and a factory 3 panel bed cover.  It is a great vehicle with lots of versatility!  The vehicle has a clean title history.

Though you might not know it from looking at vehicles like the XTS and Escalade, if you take a broader look at history, you'll see that Cadillac models have gotten a lot smaller from the tail-finned highway cruisers of old. At least when it comes to coupes, anyway. The Eldorado, in particular, kept getting smaller until it disappeared, its place taken in recent years by decidedly more compact XLR, CTS Coupe and ELR hybrid. What you see here, however, is Cadillac's smallest coupe yet.
Revealed today at the Detroit Auto Show is the new 2015 Cadillac ATS Coupe, the brand's first compact two-door coupe, and the first production car to wear the brand's all-new crest. It shares the same platform and wheelbase as the existing ATS sedan, but packs a wider track and unique bodywork that's decidedly more conservative and less unique in its angular styling than the CTS Coupe that it's likely to ultimately displace in the Cadillac lineup. Styling aside, the all-American luxury marque has engineered the ATS Coupe with a focus on reducing weight to the benefit of both performance and fuel economy, giving it near 50/50 weight balance front to rear with underbody aerodynamic elements helping it cheat the wind.
Buyers will be able to choose between two engines: a 2.0-liter turbo four and a 3.6-liter V6.