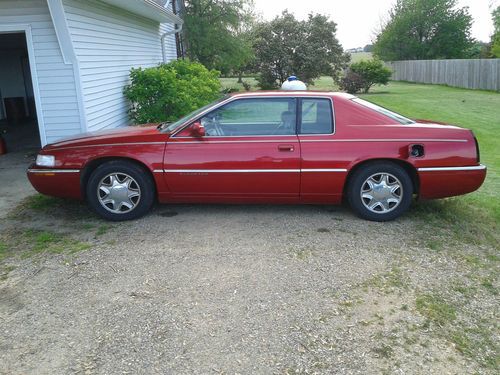 Up for sale is my 1997 Cadillac Eldorado Base. Would make a good parts vehicle or wouldn't take a lot for someone with more time than I to fix it up. The vehicle starts up and can drive up and down the road but will need a few items to make it more road worthy. Car currently need 2 coil packs and the water pump pulley replaced. The car also has a crack in the windshield on the lower section that goes completely across courtesy of a salt truck (barely noticeable). New radiator, water pump, and tires (only 12k on them) have been installed within the last two years. The only additional things that the car needs is the driver's side window motor will need to be replaced or looked at and the power antenna isn't operating since I have taken her out of storage. The busted out grill and bumper came from a VERY LOW impact (under 10mph) with a trailer hitch. Car currently comes with a full tank of gas (that should be like gold). The only thing the car needed when I took it out of storage was to charge the battery. The A/C blows ICE COLD still and all the electronics (except for those mentioned) seem to be in good working order. I have both sets of keys for the vehicle and the manuals aswell. The interior only has two very small cuts in the back seat but other than that it is in good order.

There is no warranty expressed or implied on this vehicle. It is being sold AS IS and WHERE IS. Shipping is the responsibility of the buyer. I will help with the pick up of the vehicle as much as possible. I have described this vehicle to the best of my knowledge. If you wish to inspect it, I will work something out.

Please don't hesitate to ask any questions concerning the vehicle. I will try to assist you the best I can