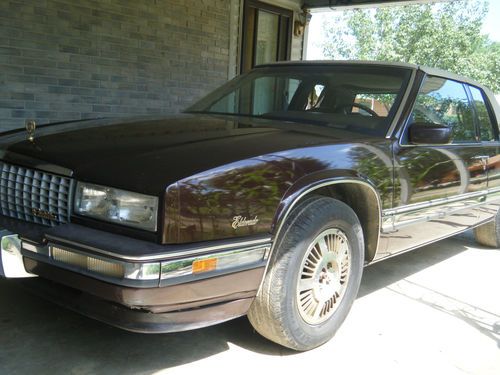 Condition: UsedA vehicle is considered used if it has been registered and issued a title. Used vehicles have had at least one previous owner. The condition of the exterior, interior and engine can vary depending on the vehicle's history. See the seller's listing for full details and description of any imperfections.Seller Notes:"NEEDS LEFT FRONT WHEEL BEARING, FRONT STRUTS, AC HOSE REPLACED AND HAVE AC CHARGED. RADIO DOESNT WORK VERY WELL. THIS IS ALL THIS CAR IS NEEDING AT THIS TIME"

Up for sale is a 91 Cadillac Eldorado. Great running car. Was my grandmothers car. Only has 84,XXX orig miles. Been drove very little. Does need some tlc nothing that major. Needs ac hose replaced and charged for ac to work, it needs new struts in the front (drives just bouncy going down the road) left front wheel bearing is making a lil noise, radio doesn't work that well, vinyl top has some damage as seen in the pics has tape on it by the passenger rear window other then those few things it is a great running dependable car. it gets around 17mpg it has the 4.9 v8 engine in it. would drive anywhere. tires has good tread left she got new Michelin's few years ago. Also has a few rips in the seats and on the arm rest from the sun seen in pictures

Thank you for looking