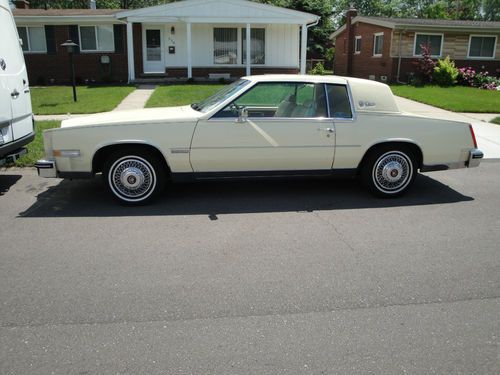 1983 Eldorado same loving owner since 1993,48,000 actual miles,seems like mostly original paint,painted pinstripes still there,vinyl top is amazing condition,interior seats, carpet,door panels,dash very nice,headliner starting to bubble just slightly not falling as of yet still up pretty good but needs redone for interior to be perfect,mechanically the 4100 purrs,trans shifts smooth and on que,everything power works except antenna,just keeps running which means mast has broken cable,radio still works,brakes,exhaust,tires,air shocks are fine,front end tight as you would expect of a 48,000 mile car,car has been stored and driven but only in good weather,fly-in drive home ,im confident of that,owner passed away this spring and family live in fla.and estate was liquidated ,if your looking for a car that will dazzle with a professional detailing and be ready for any car show this low mile original eldo in triple yellow is a timeless classic.any questions you can call me emails are not my thing plus its better to hear my voice when answering your questions.248-633-4323 steve remember they are only original once.check my feedback I describe them honestly.also car was ziebarted ,plugs are all thru the car ,has I think 3 spots that need a little touch up.