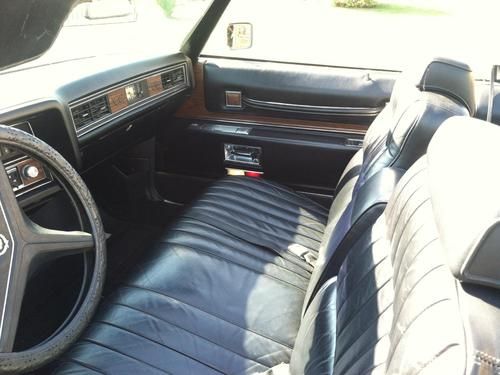 This is a beautiful1973 Eldorado with only 61,875 original miles. Its hard to believe this car is 40 years old!!!  Ther is no rust or rot and its lines are straight & true. The power top has no tears or fading and goes up & down with ease. Power window, seats all work. Original am/fm radio plays & sound  great & the power antenna goes up/down as it should. Headlights and directional work. other options include remote side view mirror control & cruise control. Car has a/c .... not cold ...all the factory equipment is there ....most likely just needs a recharge. The car has had one repaint (per previous owner) and its a gorgeous job!!!  The under carriage is solid. THis car drives effortlessly; sterring and brakes are both fluid. P235 white wall tires are in good shape, lots of tread left. the ride is smooth as you would expect from a Cadillac, no rattles. Original 500ci engine, runs strong with no pinks or knocks. The transmission shifts smoothly. Old service records indicate this car has only been driven 10,000 miles in the last 13 years!!!!!!   belts and hoses look good. Battery is 2 years old. The interior is original and absolutely stunning, The classic black leather has no cracks, rips and is still soft & supple. The black rug is beautiful. The dash is perfect , again no cracking or fading. The wood trim on the doors and dash looks like new. Interior lights all have there covers. Beautiful full-width Cadillac rubber mat up front. Original 1973 manual goes with the car. This specific Eldorado was professionally appraised at $20000.00 in  2009. The paperwork documentation will be sent with the car. Previous owner stated --- car has been to numerous local car shows and parades ( and was a big hit!!!). The photos of this car say it all!!!!

The reserve is below NADA value and well below appraised value. If you are a convertible and /or Cadillac enthusiast, then don't let this car pass you by. We all know these  early 70's Eldorado's are gaining in popularity and value. They are well built and have a great design. The fortunate person who buys this car, will just turn the key and enjoy the rest of the summer. Thanks for you intrest and best of luck bidding!!!!!