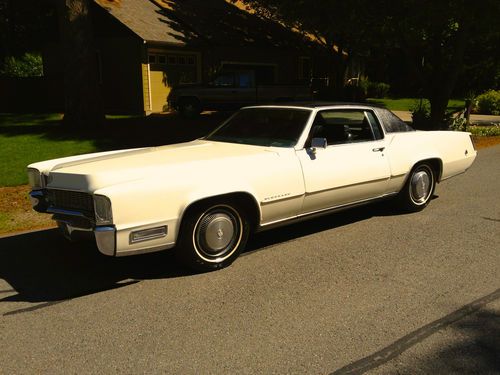 Condition: UsedA vehicle is considered used if it has been registered and issued a title. Used vehicles have had at least one previous owner. The condition of the exterior, interior and engine can vary depending on the vehicle's history. See the seller's listing for full details and description of any imperfections.Seller Notes:"Good shape for being all original and stock. 4 small rust spots,"
This car is a true one owner car. Purchased from the showroom floor in 1969 by the owner. It is a daily driver or a great start to a show car. Runs and drive perfectly.
125,xxx original miles with only 24,500 miles on a complete engine/tranny rebuild. The car does not burn or leak oil. Tons of power.
Brakes are fresh. New exhaust system and mufflers.
Includes 4 almost new snow tires on factory Eldorado rims.
AC compressor is new and just serviced
It needs new power window motors (drivers is weak, passenger dead)
Does have 4 small, repairable rust spots. Paint is that of a older vehicle (but looks good minus
a few spots!). Body is extremely straight.
The front seat is in good shape with the exception of a small tear on the back. Rear seats
have never been re-upholstered. Deteriorated on the tops.
The car is not perfect but a solid original, running and functional rare Cadillac. All major systems are in great
working order. The car is a full blown driver.