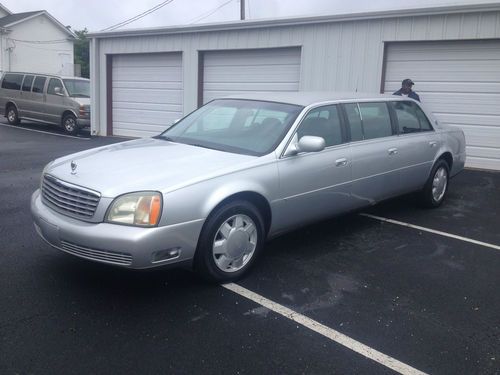 Condition: UsedA vehicle is considered used if it has been registered and issued a title. Used vehicles have had at least one previous owner. The condition of the exterior, interior and engine can vary depending on the vehicle's history. See the seller's listing for full details and description of any imperfections.Seller Notes:"Nice car used for funerals only at a South Carolina funeral home. Air works good in the front and rear. Leather interior is in good condition as shown in the pictures. New tires with less than 500 miles. Small place about 2 inches on the rear bumber(See Picture). 72000 Miles"

Nice car used for funerals only at a South Carolina funeral home. Air works good in the front and rear. Leather interior is in good condition as shown in the pictures. New tires with less than 500 miles. Small place about 2 inches on the rear bumber(See Picture). 72000 Miles

So, you're a dyed-in-the-wool General Motors fan, but like the notion of a machine like the Hennessey Velociraptor. We have good news for you. Behold the Aria Coachworks XPLORE Cadillac Escalade. For a modest fee, Aria will outfit your Escalade with a custom suspension, BF Goodrich all-terrain tires wrapped around aluminum wheels, a Warn winch and a special exhaust. There's even a snorkel option for those of you with aspirations toward deep water crossings. Consider yourself warned, however: unlike other GMT900 SUVs, the Cadillac only has an all-wheel drive system, not the more rugged four-wheel drive setup of the Chevy Tahoe and GMC Yukon). Outside, the luxury SUV gets matte paint, black chrome trim, XPLORE power running boards and a roof rack system.
The interior also receives a few fun changes as well, but we're more interested in the fact that buyers can snag a power roof top tent. You know, in case you need to camp out at Best Buy for the PS4. There's also a matching camp trailer and, our personal favorite, a matching BMW GS motorcycle. Bikes not your bag of tricks? That's fine. Aria will also sell you a matched Airstream trailer or Old Town wooden canoes. As much as we want to hate this, we love the notion of bashing through the woods in a $100,000 Cadillac battlewagon with our GS in tow. Check the press release below for more information.