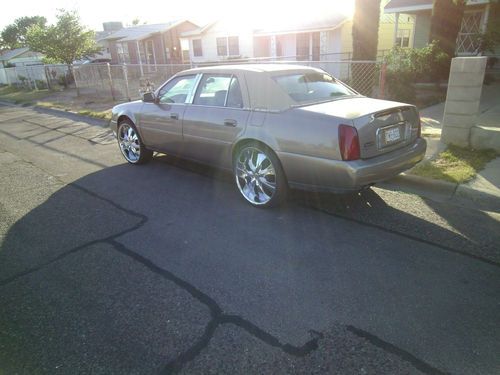 Condition: UsedA vehicle is considered used if it has been registered and issued a title. Used vehicles have had at least one previous owner. The condition of the exterior, interior and engine can vary depending on the vehicle's history. See the seller's listing for full details and description of any imperfections.Seller Notes:"NONE"

UP FOR SALE NICE CONDITION 2002 CADILLAC DEVILLE WITH 24 INCH CHROME WHEELS. CAR RUNS SO SMOOTH. ENGINE AND TRANSMISSION IS STRONG  WITH NO KNOWN DEFECTS. NO SEERVICE ENGINE LIGHTS ON.  THIS CAR IS READY TO GO, PAINT ON CAR IS SHINY.NO RESERVE... SELLING DUE TO JUST BUYING NEW CAR AND NO NEED FOR CAR.AS IS NO WARRANTY!!! IF ANY QUESTIONS FEEL FREE TO CALL OR EMAIL AT 432-258-0063. THANKS