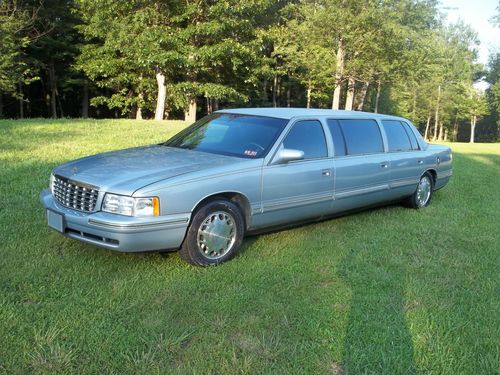 Excellent, 1998 Cadillac Deville 6 Door Limousine with 52K Original Miles. This car was built by S & S Coach in Ohio.  This car has been kept in Excellent condition.  This Limo runs and looks beautiful and is a great find in this condition with such low miles. It needs nothing at all. Rust Free and Smoke Free!

This 1998 Cadillac Deville Limousine is fully equipped with all the options including: Power Windows, Power Locks, Remote Keyless Entry, 6 Doors, Alloy Wheels, Chrome Accents, Front Facing Back Middle Seat, Sound system, Rear AC and Heat, Steering Wheel Controls, and Much Much More. The engine and transmission are in perfect running condition. This Cadillac drives smooth and straight down the road. This car was well maintained its entire life. The Silver exterior of this Cadillac is in great shape. The paint shines like brand new and the body is laser straight. This car has never been in an accident. The body does not have any dents or dings anywhere and the paint looks good. This car is as sharp as they come. The leather seats and carpet are in great shape and the windows are newly tinted.  With such low mileage, this car has hardly been used at all. The condition is amazing and it shows. Tires have good life left on them. This car has everything you could ask for in a Limo. This Cadillac can be used for work or family. It's pretty awesome. This car is ready to go today. Don't let this beautiful Cadillac get away.